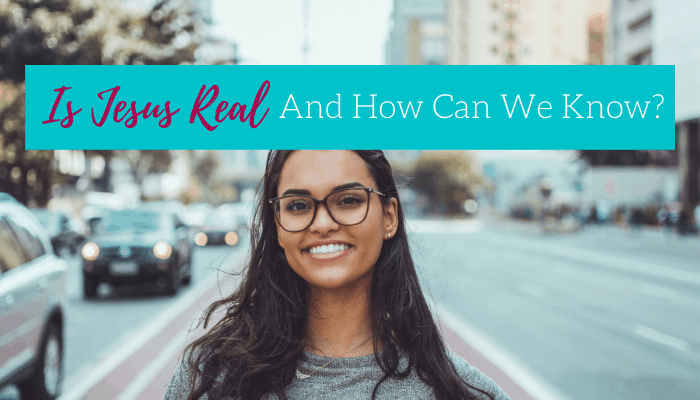 This post may contain affiliate links. This means if you click on the link and purchase the item, I will receive a small commission at no extra cost to you. Thank you!

Is Jesus real? That is a big question. Well, not really. It’s a simple question with a simple answer. Yes, Jesus is real. However, it’s a big question to tackle with a skeptic. A lot of people will claim there is no proof that Jesus was a real person in history, so they use that excuse to stay in their disbelief.

But I can’t help but wonder. How many other ancient historical figures do skeptics believe existed with little to no proof? I’m finding that in a lot of cases, people scrutinize the claims of the Bible with a higher level of skepticism than other texts presented to them.

And you know what, that’s fine. Because the best news is that there is evidence to support the claims of the Bible that Jesus lived, died, and was risen on the third day.

“Christians should be delighted to find that the evidence for Jesus’ resurrection is extremely compelling, even when using only a small collection of strongly attested historical facts to support the event.” (A Case for the Resurrection of Jesus, 28).

I’m quickly learning that there is more evidence pointing to the truth of Christianity than I realized. And it’s so exciting to learn about these discoveries. Because each piece of evidence can help Christians make a stronger case that will hopefully win more people to Christ. In this blog post, I’m going to outline a few pieces of evidence that can help us know that Jesus is real.

Is Jesus Real Just Because the Bible Says So?

The Bible tells us that it has been made plain to us that God is real, and that man is without excuse for their disbelief.

For what can be known about God is plain to them, because God has shown it to them. For his invisible attributes, namely, his eternal power and divine nature, have been clearly perceived, ever since the creation of the world,[a] in the things that have been made. So they are without excuse.

According to scripture, we all know the truth. But because of our unrighteousness, we suppress it. We pretend it’s not real and make up reasons as to why it’s not.

And as a Christian, I accept as truth what scripture tells us about our hearts. However, a skeptic does not believe the words of the Bible, so this statement means nothing to them. To a skeptic or nonbeliever, this is just a cop-out. A lazy way for believers to not have to think for themselves.

The pretty cool thing is, however, that the Bible is actually a reliable source of evidence for its own claims. The Bible is not one book written by one person at one particular point in time. It’s a collection of historical accounts written over centuries of time. And this fact helps us to analyze and conclude that the Bible is sufficient evidence to support itself. Here are a few reasons the Bible should be included as reliable evidence.

Is Jesus Real According to Nonbiblical Sources?

Okay, so I was very eager to write this section because I get SUPER excited about the evidence outside of the Bible that supports the Bible. Providing this sort of “outside the Bible” evidence is one way we can help skeptics begin to see that it’s possible that Jesus was and is real.

I once had someone tell me that there were no sources outside the Bible that support the Bible’s claims. Like ZERO. And this was back before I had really done my own research on the matter. And all I could really respond with at the time was “I’m sure there are”.

But what stood out to me about the conversation was that this person was so certain about his claim.

This struck me because how can someone be so certain of a thing before they’ve done any research? And I fear that a lot of nonbelievers (and believers for that matter) are the same way. They become convinced a thing is true because of something they heard and something they feel.

But the great news is that my friend was wrong. There is nonbiblical evidence that supports the claims of the Bible. Reasonable evidence that confirms the existence of Jesus. And I am going to share 3 below, all of which can be found in “Cold-Case Christianity: A Homicide Detective Investigates the Claims of the Gospels” by J. Warner Wallace.

Three Nonbiblical Sources of Evidence for the Existence Jesus

Learning about the non-biblical evidence that corroborates the Bible just lights a stronger fire under me to want to spread the gospel.

Is Jesus Real According to Archaeology?

There have been several archaeological discoveries over the years that support the claims of the Bible and point to Jesus’ existence. Let’s briefly look at three examples.

These are just a few archeological findings, which I’m citing from “Cold-Case Christianity”. These are fascinating discoveries. These real life, physical pieces of evidence make for an extremely compelling case for the truth of the Bible.

Ask and it will be given to you; seek and you will find; knock and the door will be opened to you.

As much as I love what Apologetics offers and think it’s a necessary method of reaching certain types of people, there is one piece of evidence that surpasses all evidence. And that’s the spiritual evidence of the Holy Spirit.

I look at Apologetics as just another way of planting the seed of Truth to a particular type of person who tends to be more analytical, intellectual, and logical. Their brains work in a different way, and they need something a little more than the words “just have faith”. And I don’t look at that as a bad thing. It’s good that they don’t just accept any and every “truth” that is presented to them.

However, we know that “if God is not involved in the process, conversion will not take place”. That’s a quote taken from “The Case for the Resurrection of Jesus”. And it’s so true.

“The Christian has the Holy Spirit who testifies to her that Christianity is true and that she belongs to God. The historical certainty we have of Jesus’ resurrection only reinforces that God’s Spirit has indeed spoken to us.” (The Case for the Resurrection of Jesus, 33).

Is Jesus real? If you’re a Christian, you know the answer is yes. If you’re not a Christian, I encourage you to explore the evidence that exists, but to first surrender yourself to God and ask Him to help you be open to the Truth. Otherwise, no matter what is presented to you, you will reject it.

What other evidence have you learned that supports the truth of the Cross?

Where are All the Black People in Apologetics

1 thought on “Is Jesus Real and How Can We Know?”